Skip to content
This event is by invitation only.

The Syrian opposition continues to fragment politically and militarily. The moderate leadership has weakened, while Islamist forces have been strengthened militarily– even as they turn their guns on other opposition groups as well as the Syrian government. The opposition's confusion now seems to have infected its sponsors as well. How did this happen? And what are the likely scenarios for the future? In this Salon, International Crisis Group Syria analyst Noah Bonsey leads an off-the-record discussion of Syria's opposition and its future.

Noah Bonsey is a Senior Analyst with the International Crisis Group, where he has contributed to their coverage of Syria since May 2012. Prior to his current position, Noah worked for three years as an Arabic social media analyst for a private consulting firm, managing a team of analysts focusing on regional political and militant affairs. Noah lived in Damascus in 2006 and 2008-2009, was based in Qatar in 2010, and speaks Modern Standard and Syrian colloquial Arabic.  He holds a Bachelor’s degree from Williams College and a Master’s in Arabic from the University of Maryland. Noah is the lead author on several recent Crisis Group reports on Syria, notably Anything But Politics: The State of Syria's Political Opposition and  Tentative Jihad: Syria's Fundamentalist Opposition.

Scott Malcomson is director of communications for International Crisis Group. He has reported from Central and South America, the Caribbean, Africa, the Middle East and Central Asia, and throughout Europe and North America. He was foreign editor of the New York Times Magazine from 2004 to 2011 and edited foreign-affairs Op-Eds for the Times from 2001-2. Previously he served as a senior advisor to Sergio Vieira de Mello at the United Nations in 2003 and to Ambassador Susan Rice at the U.S. State Department in 2011-12. He also designed and taught courses on technology and journalism at New York University and was an editorial advisor to Google executive chairman Eric Schmidt and Jared Cohen in their work on connection technologies and international relations. Malcomson is the author of  Tuturani, Empire's Edge, One Drop of Blood, and most recently Generation's End a memoir of American journalism, foreign policy and the United Nations in the two years from 9/11 to the destruction of the UN mission in Baghdad in August 2003. 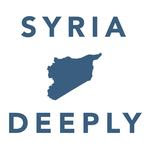 Syria Deeply is an independent digital media project of News Deeply, a team of journalists and technologists who are exploring a new model of storytelling around complex global issues. Our goal is to build a better user experience of the story by adding context to content, using the latest digital tools of the day. With time, our hope is to add great clarity, deeper understanding, and more sustained engagement to the global conversation. By mixing user generated content with the insight and oversight of seasoned journalists, we merge the power of citizen journalism with the standards of the professional press.